We just returned from our vacation where we traveled the roads of our founding fathers. 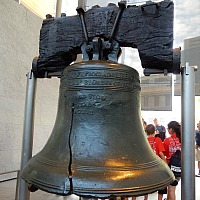 Our adventure began in Philadelphia, PA. Our first stop was the Liberty Bell. The bell rang in the Pennsylvania State House (now known as Independence Hall) from 1751 to 1846. The inscription on the bell reads: “Proclaim Liberty Throughout All the Land Unto All the Inhabitants thereof.” The engraving was taken from Leviticus 25:10 and is a reminder of how the Christian faith influenced our founders.

We walked a few blocks down Market Street and discovered a building once owned by Benjamin Franklin. The brick structure is home to a Post Office, that the lady behind the counter told us was the United States’ very first, and it’s still operated by the United States Postal Service today. Among other things, Franklin was the nation’s first Post Master General and lived a few steps away from the complex. “B. Free Franklin” was his postmark, and the workers continue to hand stamp the unique mark on every piece of mail that leaves that post. I made sure to send a postcard, with the historical mark, home to Atticus to commemorate our visit.

We sauntered over to Arch Street to visit the Betsy Ross house. Ross was an upholsterer by trade, and one afternoon George Washington, along with two other men, walked into her shop, showed her a sketch, and asked her to sew the nations very first stars and stripes. That moment in history turned Betsy Ross into an American legend. Aside from her legacy as the first flag maker, Betsy lived a somewhat sad life as she was widowed three times and lost two children.

As we made our way to the front of the home, where a 1777 Betsy Ross manned her upholstery shop, we found her discussing her flag making skills with a family of four. Once the family moved on, Atticus decided to engage Ms. Ross in conversation. He announced, “I am from the future, and I have travelled back in time. I have some bad news for you.” Ms. Ross, who never broke character, was curious to hear the news. Atticus informed her that she would lose her first and second husbands after a short marriage to both. Ms. Ross assured Atticus that her current husband, Joseph Ashburn, was alive and well. He’s a mariner, and at sea at the moment, but he shall return home soon. Atticus told her that, sadly, he would not. But Atticus had good news to share as well, and he told Ms. Ross that she will marry a third time, and this time the marriage would last for many years. Ms. Ross wasn’t buying anything Atticus was saying, and she bid him adieu so she could attend to the new customers who had entered the shop a few minutes earlier and witnessed their delightful exchange. 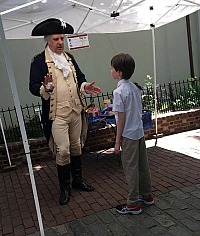 Outside, in the courtyard of the Ross house, Atticus met General George Washington. Washington found Atticus to be a curious and engaging young man. They spent several minutes, on three separate occasions, in conversation. General Washington was every bit the gentleman the history books have made him out to be. He discussed the current (1777) situation with Atticus and answered all of his questions. General Washington happily agreed to pose for a “portrait” with the young lad, but I prefer the candid shot that is shown. 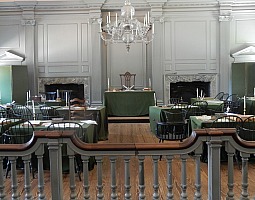 We soon found our way to Independence Hall – the birthplace of freedom. The Declaration of Independence was signed there. Men such as George Washington, Thomas Jefferson, and Benjamin Franklin walked those floors and created the greatest country the world has ever known inside those walls. It was a humbling experience, and I thank God for those patriots and their vision.

We veered off our founder’s path and made our way to the Museum of Art to visit the Rocky statue and climb those famous stairs. Atticus ran up the stairs. I simply walked — my running days are long past me now.

The next day we took the back roads from Valley Forge, PA to Trenton, NJ. Along the way, we found Washington Crossing Historic Park. This park marks the area where General George Washington and the Continental Army crossed the icy Delaware River on Christmas night in 1776.

Once the army crossed the river, they marched nine miles south to Trenton, where they swiftly defeated the Hessians – many of whom occupied the Old Barracks. The British built nine barracks like this during the French and Indian War, and t

hey were put to use again during the Revolutionary War. This is the only barracks that remains standing today.

We arrived at the barracks when a group of school children were preparing for a tour, so we joined them for a trip back in time to 1777. We were “greeted” by a robust recruiter who talked us all into taking an oath to serve in the Continental Army. He was sharply dressed in his uniform, and he lined us up to give us instructions on how a soldier should behave – and to introduce us to our new best friend – the musket. He explained all the parts and the function each serv

e. Then, he placed the powder inside the barrel and prepared to fire. The thunderous BOOM shook Atticus – terrified him as his knees buckled and his body trembled. I had prepared him in advance that it would be loud, but he wasn’t expecting it to be that loud. I told him it was just like a firework and it wasn’t anything to be concerned with. Fortunately, he recovered quickly. Thank God for progress.

The recruits were soon led into the nurse’s station to receive information on health, diseases, and medical treatments. The nurse began to explain smallpox to everyone, and informed us that every soldier, under the orders of General Washington, will have to be inoculated for the deadly disease.

The nurse asked for a volunteer to help her demonstrate the inoculation process. Several children raised their hands, and Atticus was selected. He took a seat on the assigned stool, and the nurse began to explain the process and ask him a few questions. As he began to realize what she was talking about, I could see that he was starting to look uncomfortable. Nearing the end of the demonstration, he raised his hand and told the nurse that he didn’t want to do it anymore, so she excused him and chose another child to help her end the demonstration. When Atticus arrived back to the seat beside me, he whispered in my ear, “I thought she was really going to give me a shot!” Because he is so literal in his thinking, he has trouble separating role play from reality, often confusing the two, so this didn’t surprise me. 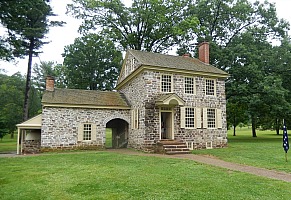 The following day, before we departed from Valley Forge, we visited Washington’s Headquarters. The Continental Army spent the winter of 1777-1778 encamped in the mountainous region of Valley Forge and basically formed a city of 12,000 plus. Washington spent those days in a home owned by Isaac Potts. The house is still standing today and, according to the park rangers we spoke with, is about 80% original from the time Washington and his army occupied the land.

As we headed toward home, we made one last stop in Shanksville, PA to pay our respects to the unsung heroes of 911 – the passengers and crew members of Flight 93. I’ll never forget that day. Every year, when the anniversary rolls around, it seems New York and D.C. always dominate the headlines. In my mind, the biggest heroes of that day were on board that airplane. They found themselves in a position where they knew what was happening on the ground, and they came together to form a plan to try to prevent another attack. I believe the spirit of our founding fathers, and patriots who fought alongside Washington, was alive and well on Flight 93 that September morn. “Let’s Roll” – the rallying cry of warriors.

Now, we find ourselves back home in our air conditioned condo and comfortable beds. We’ve driven hundreds of miles, walked countless hours, and with aching feet and grateful hearts, we’ve ended our latest adventure with a better understanding of our country’s beginnings – and we have a new appreciation for the bravery and love of freedom that patriots for over two centuries have displayed. It’s my prayer that Atticus will continue to be open to learning, and will someday fully understand the true cost of freedom and how fortunate he is to be born an American.

Follow Adventures with Autism and the Almighty on WordPress.com

© Adventures with Autism and the Almighty, 2017. Unauthorized use and/or duplication of this material without express and written permission from this site’s author and/or owner is strictly prohibited. Excerpts and links may be used, provided that full and clear credit is given to Adventures with Autism and the Almighty with appropriate and specific direction to the original content. Content includes all written material and photographs.